Good Sunday Morning Friends!  Fran is back with a new book review.  I am laughing as I type this because Sterling is sitting with me looking at the book pictures saying, ” Mom I want those two books, we don’t have them, order them”!  So it looks like we will be adding these to our collection! 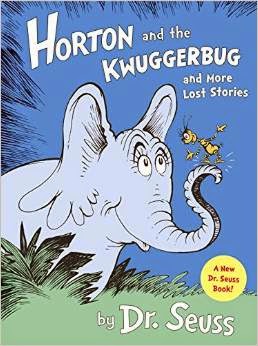 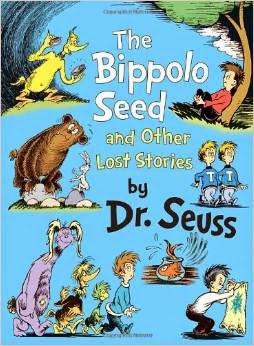 My
favorite book in first grade was “The 500 Hats of Bartholomew Cubbins”
by Dr. Suess.  Now, almost 60 years later, I’m still reading  Dr. Suess
stories that are new to me.

Dr.
Charles D. Cohen has amassed the world’s  most comprehensive private
collection of “Suessiana.” In the course of his research, he found a
series of short works that Ted Geisel (aka Dr. Suess) had published in
magazines in the 1950’s.  In 2011, Random House published seven of these
stories in a best-selling  book called “The Bippolo Seed and Other Lost
Stories.”


Now in 2014, Random House has published another collection of Dr. Suess
stories titled “Horton and the Kwuggerbug and More Lost Stories.”
These stories originally appeared in “Redbook.”  Beloved characters like
Horton the Elephant and Marco appear, as well as familiar places like
Mulberry Street. There’s even a grinch, although not the same grinch who
tried to steal Christmas.”

In “Horton and the Kwuggerbug,”Horton agrees to a very bad deal with a very devious bug. All’s well that ends well.

“Marco
Comes Late” is the tale Marco tells his teacher when he’s late for
school. As he hurried down Mulberry Street, a bird laid an egg on his
arithmetic book.  What to do?!

“
How Officer Pat Saved the Town” is an example of what Dr. Suess called
“logical insanity.” Officer Pat relentlessly pursues a logical course to
rectify a situation that didn’t make sense in the first place.

In the case of these stories, what’s old is brand new.  As well as fun and delightful.